Get these ADHD ebooks from the ADHD Information Library at our special price! 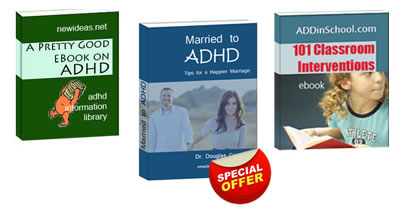 ADHD is a common diagnosis in children. So, if you are a parent looking for information about ADHD in your child, or teen, or even spouse, please know that you are not alone, and that there is a lot of good information available here on the internet.

ADHD is the abbreviation for Attention Deficit Hyperactivity Disorder. ADHD is one of the most common childhood behavior disorders. Of all children referred to mental health professionals about 35% are referred for ADHD, more than for any other condition. Those with ADHD often have problems in most areas of their life, including life at home, at school, at their job, and in their relationships.

"Attention Deficit Hyperactivity Disorder" is a neurological disorder that impacts somewhere between 5% and 10% of people, young and old. ADHD impacts four main categories:

Attention - causing people to have problems paying attention and focusing on a task, or finishing tasks, especially if they are not very interesting tasks.

Impulsivity - causing a lack of self-control. Impulsive behaviors, or impulsive choices, can cause havoc in relationships, work, school, or life.

Easily Bored - Unless the task is very stimulating, like a video game or TV program, or playing outside with friends, those with attention disorders are often easily bored by a task - especially bored by homework, math tests, balancing checkbooks, or doing taxes, and many of these tasks just never get done.

Children, teens, and adults can all suffer from ADHD. "Attention Deficit Hyperactivity Disorder" impacts somewhere between 5 percent and 10 percent of children and teenagers, and about 5 percent of all adults. Less than half of children with ADHD ever "out-grow" it in adolescence or adulthood. If untreated, the disorder can have long-term adverse effects into adolescence and adulthood, so we always recommend early and aggressive treatment.

The disorder has different "looks" or "types." For some it severely impacts behavior, and for others it greatly impacts learning. For the group in the middle, it just impacts their attention, focus, concentration, and getting the job done.

Different Types of ADHD in Children

ADHD research literature, recent books, and common sense, all point to the fact that there are different types, or styles, of ADHD. In the past we referred to Attention Deficit Disorder: Inattentive Type, or Impulsive/Hyperactive Type, or a Combined Type. Today the diagnostic differences are a bit less clear, but the reality doesn't change. Even though doctors use the term "ADHD" in every diagnosis, one person with ADHD may have a completely different set of symptoms from another with ADHD.

While our observations are based on clinical observations and experiences, they are backed up by recent brain research. For years we have illustrated that there are different types of ADHD to parents and teachers by using the characters of a great children's book : Winnie the Pooh and his friends in the Hundred Acre Wood.

Winnie the Pooh Type ADHD describes those who are inattentive, distractible, and disorganized. They tend to be friendly, but live in a cloud of "brain fog".

Tigger Type ADHD describes those who are inattentive, and also impulsive and hyperactive, restless and bouncy - "because bouncin' is what Tiggers do best!"

Eeyore Type ADHD describes those who are inattentive, but also suffer with a chronic low-grade depression. About 25 percent of those with ADHD also suffer from depression, especially females.

Piglet Type ADHD describes those with ADHD who have trouble shifting attention from one thing to another, worry alot, and are easily startled.

Rabbit Type ADHD describes those who also have trouble shifting attention, but are also inflexible, and can be demanding and argumentative. Though this might describe many teenagers anyway, we are here concerned with children, teens, and adults who have this type of ADHD...

And then there is a Troubled Type ADHD for which there is no character in the Hundred Acre Wood. The Tazmanian Devil from Loonie Tunes is probably a better cartoon character to illustrate this type of ADHD. Those with this style of ADHD tend to be very irritable and perhaps aggressive. They are often impulsive in their aggression. They can be defiant and disobedient. And very commonly have other specific learning problems.

Learn more about ADHD at the ADHD Information Library

Visit the ADHD Information Library with with over 235 articles on ADHD, filled with tips, ideas, and the knowledge you need to raise successful ADHD children, teens, and adults!